Alan Jackson: Where Were You (when The World Stopped Turning) Lyrics

Where were you when the world stopped turning on that september day?
Were you in the yard with your wife and children
Or working on some stage in l.a.?
Did you stand there in shock at the sight of that black smoke
Risin’ against that blue sky?
Did you shout out in anger, in fear for your neighbor
Or did you just sit down and cry?

Did you weep for the children who lost their dear loved ones
And pray for the ones who don’t know?
Did you rejoice for the people who walked from the rubble
And sob for the ones left below?
Did you burst out with pride for the red, white and blue
And the heroes who died just doin’ what they do?
Did you look up to heaven for some kind of answer
And look at yourself and what really matters?

I’m just a singer of simple songs
I’m not a real political man
I watch cnn but i’m not sure i can tell
You the difference in iraq and iran
But i know jesus and i talk to god
And i remember this from when i was young
Faith, hope and love are some good things he gave us
And the greatest is love

Where were you when the world stopped turning on that september day?
Were you teaching a class full of innocent children
Or driving down some cold interstate?
Did you feel guilty ’cause you’re a survivor
In a crowded room did you feel alone?
Did you call up your mother and tell her you loved her?
Did you dust off that bible at home?

Did you open your eyes, hope it never happened
Close your eyes and not go to sleep?
Did you notice the sunset the first time in ages
Or speak to some stranger on the street?
Did you lay down at night and think of tomorrow
Or go out and buy you a gun?
Did you turn off that violent old movie you’re watchin’
And turn on “i love lucy” reruns?

Did you go to a church and hold hands with some strangers
Did you stand in line and give your own blood?
Did you just stay home and cling tight to your family
Thank god you had somebody to love?

Where were you when the world stopped turning on that september day? 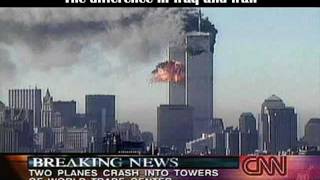 Connie Smith – He Touched Me

He Touched MeWatch this video on YouTube Connie Smith: He Touched...

Don Williams – I Believe In You

Carrie Underwood – I Ain’t In Checotah