I remember the year that clayton delaney died
They said for the last two weeks that he suffered and cried
It made a big impression on me, although i was a barefoot kid
They said he got religion at the end and i’m glad that he did

Clayton was the best guitar picker in our town
I thought he was a hero and i used to follow clayton around
I often wondered why clayton, who seemed so good to me
Never took his guitar and made it down in tenn-o-see

Well, daddy said he drank a lot, but i could never understand
I knew he used to pick up in ohio with a five-piece band
Clayton used to tell me, “son you better put that old guitar away,
There ain’t no money in it, it’ll lead you to an early grave.”

I guess if i’d admit it, clayton taught me how to drink booze
I can see him half-stoned a-pickin’ out the lovesick blues
When clayton died i made him a promise, i was gonna carry on somehow
I’d give a hundred dollars if he could only see me now 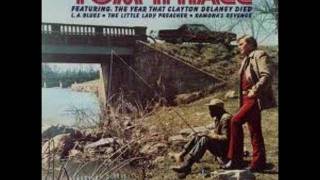 Tom Thall – The Year That Clayton Delaney Died on Youtube

Ferlin Husky – In The Valley He Restoreth My Soul

GoneWatch this video on YouTube Ferlin Husky: In The Valley He...

Watch this video on YouTube Bob Wills And His Texas Playboys: San...

Jimmy Driftwood – Where Is The River Gone

"Beautiful Buffalo River" by Jimmy DriftwoodWatch this video on YouTube Jimmy Driftwood: Where Is The River Gone Lyrics I Used To Live By An Untamed River In...

Aerosmith - Come Together with lyricsWatch this video on YouTube Aerosmith: Come Together Lyrics Here come old flat top He come groovin’ up slowly He got joo joo...

Sierra Noble - Try AnythingWatch this video on YouTube Sierra Noble: Try Anything Lyrics I stood at the edge and just dreamed Of breaking away from all that i’ve...

Chris Young - You (Official Video)Watch this video on YouTube Chris Young: You Lyrics Blue Skies Don’t Seem So Blue And The Stars Seem To Be A Little Dimmer...

Brooks & Dunn – That’s What It’s All About