Grandma’s turning 92
That’s a lot of years ahead of you
So, listen close to what i say
’cause grandma’s feeling old today
She said i can’t believe i’m sitting here
As old as i am
Never been stoned

I’ve waited too damn long
So, bring it on
Grandma’s gonna fly

So, i rolled it up and passed it around
Grandma smoked the whole thing down
She was making up for wasted ground
Too many times she turned it down
She said you live your life until it’s gone
And the things you never try just slip away
Until they’re gone, too

I’ve waited too damn long
So, bring it on
Grandma’s gonna fly

Now, grandma didn’t have much time left
But she made use of every breath
I swear she smiled before she left
And i watched the world fall off her chest
And as the gates of heaven of heaven opened wide
She slipped over to the other side
She was singin’, yeah 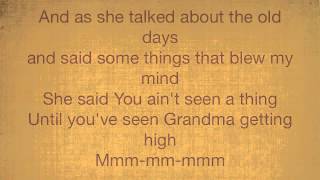 Brad Paisley – She’d Give Anything

She'd Give Anything (In the Style of Boy Howdy) (Karaoke Version)Watch this video on YouTube...

Brad Paisley – Me Neither

Brad Paisley - Me NeitherWatch this video on YouTube : Me Neither...

Alan Jackson - Sissy's Song (Official Music Video)Watch this video on YouTube : Sissy's Song Lyrics Why Did She Have To Go So Young I Just Don’t Know...

Buddy Jewell – One In A Row

Buddy Jewell - One In A RowWatch this video on YouTube Buddy Jewell: One In A Row Lyrics Am i dreaming or is that the morning sunlight shining in? I can’t...

Sara Evans - Saints & AngelsWatch this video on YouTube Sara Evans: Saints And Angels Lyrics We’re Only Human Baby We Walk On Broken Ground We Lose Our...

Dan + Shay - Nothin' Like You (Official Music Video)Watch this video on YouTube Don Shay: Nothing Like You Lyrics Mmm I remember when i first met you Sipping...